RF Designer can be purchased from Google Play

Wiring Components in the Schematic

Wiring Components in the Schematic 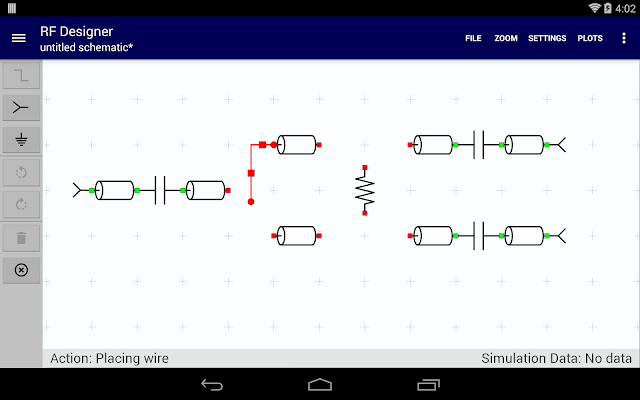 [Note: If the nodes of one or more components are touching they will show as green and will be considered to be connected. No wire is required to connect those nodes. The unconnected nodes are shown as red.]

1) Press the Wire Tool button in the tool tray to start a new wire:

2) Tap the screen where you would like the first node of the wire to start. This can be on a component node, another wire segment, or anywhere on the screen you wish the wire to start.
3) Once tapped, a red circle will appear showing the location of the start point of the wire. If this node is not where you want it, simply touch and drag the node to the correct location.
4) To create a new line segment, touch the screen where the second endpoint should appear. The line segments will only run in horizontal or vertical directions. When placing the next endpoint, the program will determine which length in the x or y direction is greater from the previous point and run the wire in that direction.
5) Once the second endpoint has been established, the line segment will appear as red. A red wire means this wire is being placed.
6) Continue placing endpoints until the desired wire is complete.
7) Wires will automatically finish if they are connected to a part node or another wire segment. A wire may also be finished by double tapping anywhere on the screen or by pressing the green button found in the tools bar. The wire will turn blue indicating it is now a part of the schematic and is selected for editing.
8) To deselect the wire, tap once again anywhere on the screen. The wire will turn black at this point.
9) At any point during the wire placing operation, the user may cancel the operation by pressing the Cancel button in the tool tray. All segments and endpoints of the wire will be removed.

1) To select a wire, simply tap on it. It will turn blue to indicate it has been selected.
2) The selected wire may be deleted by pressing the Delete button in the tools tray:

Return to “Tutorials and Examples”

Users browsing this forum: No registered users and 7 guests